About Larry and Ruth

We envision the emergence of a vital and growing church of Jesus Christ in the very resistant and largely unreached nation of Japan. Christians will worship joyfully, mobilized in the power of the Holy Spirit, and exercise their gifts in all walks of life to proclaim the message of salvation and extend the gracious kingdom of God throughout this nation and to other countries too where God sends.

We work in Tokyo, one of the world’s greatest mega-cities. Japan is a prosperous and modern but spiritually dark place, with less than 1% of the people following Jesus. Religious Japanese (there are also many atheists) worship what they themselves refer to as a plethora of “gods” with a variety of functions. Most of them practice various Shinto (Japanese indigenous religion) and Buddhist (imported from East Asia and mostly concerned with funeral rites) ceremonies that often involve offerings and prayers to the dead or to nature “gods.”

Larry’s work focuses on proclaiming the Good News of forgiveness and life through faith in Jesus Christ, calling people to repentance and faith in him, gathering new believers into churches, and assisting existing churches to do the same with increasing effectiveness so that our efforts are multiplied. We call this “capacity-building,” helping our Japanese partners to grow in ministry ability, even as they challenge us to grow too.

Through his teaching and preaching ministry as well as through relationship development, Larry helps form in children and young people, and even those in mid-career, a vision for joining in God’s work, challenging them to devote themselves as new workers for God’s harvest.

Larry consults with our main mission partner, the Reformed Church in Japan, and especially with two “target group” clusters of this church, as we seek together to discover the “who, how, when and where” plans we can form and implement to grow God’s church and start new churches.

Larry manages the business, legal and financial affairs of the Christian Reformed Japan Mission (CRJM), our incorporated organization in Japan. Larry is a member of the Japan Lausanne Committee and represents CRJM at the Japan Evangelical Missionary Association, both ecumenical groups who like us promote the extension of God’s kingdom and the mobilization of Christians in paths of service to it. Larry serves on the Board of Directors of the Christian Academy in Japan (CAJ).

Ruth works at CAJ as Student Support Team Coordinator and Middle School Resource Teacher, and she also serves as the Child Safety Coordinator, the first CAJ staff member to fill this new position. CAJ is a K-12 school of about 450 students operated by Resonate and 5 other missions offering Christian day-school education to the children of evangelical missionaries and other Christians.

We praise God for his work around the world and the privilege of serving him. Thank you for your prayers and financial support for our ministry with Resonate Global Mission. As partners in carrying out our Lord’s mission mandate, we rejoice with you that our efforts are transforming lives and communities in Japan and worldwide. Thank you!

You can support Larry and Ruth's work by either providing a one-time or recurring monetary gift, or by joining our prayer list. 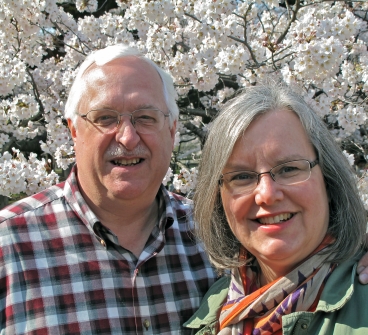