And she was terrified.

When she arrived in Nigeria months later, Veenstra had no idea what challenges awaited her. Neither did she know how monumental her work would be, nurturing the Nigerian church and igniting a movement in our denomination. Veenstra was just obeying God’s call on her heart.

Similar to missionaries today, Veenstra's ministry included communicating with supporters and churches in North America. We know from her letters, books, and other documents that her ministry was not always easy. For the first three years at her mission station, Veentra and one other young woman were the only missionaries. Veenstra’s formidable leadership skills helped them accomplish an astonishing amount of work. They built buildings, treated disease, started a school, led the church, and found time to trek far and wide to evangelize.

Veenstra had a zeal for everyone to listen for God’s call on their heart. She brought that message to people hearing the gospel for the first time, and she also brought it home with her when she visited her supporting churches.

Despite her public image as a trailblazer, leader, and courageous evangelist, Veenstra wrestled with her call. In her book, Pioneering for Christ in the Sudan, she described moments of doubt and fear.

As she began preparing to go to Nigeria, she wrote, “Then billows of doubt seemed to roll over my soul. … I was feeling my utter unworthiness to be a messenger of the King.” She also included fearful moments from the journey to Nigeria, such as fearing the stormy seas during the ocean passage, or fearing that she would be killed as she went deep into the country.

But throughout her work in Nigeria, Veenstra’s confidence in the Holy Spirit overcame her doubts. From the beginning, she tackled challenges one at a time, adopting Josh. 1:9 as her life’s motto: “Be strong and courageous … for the Lord your God will be with you wherever you go.” 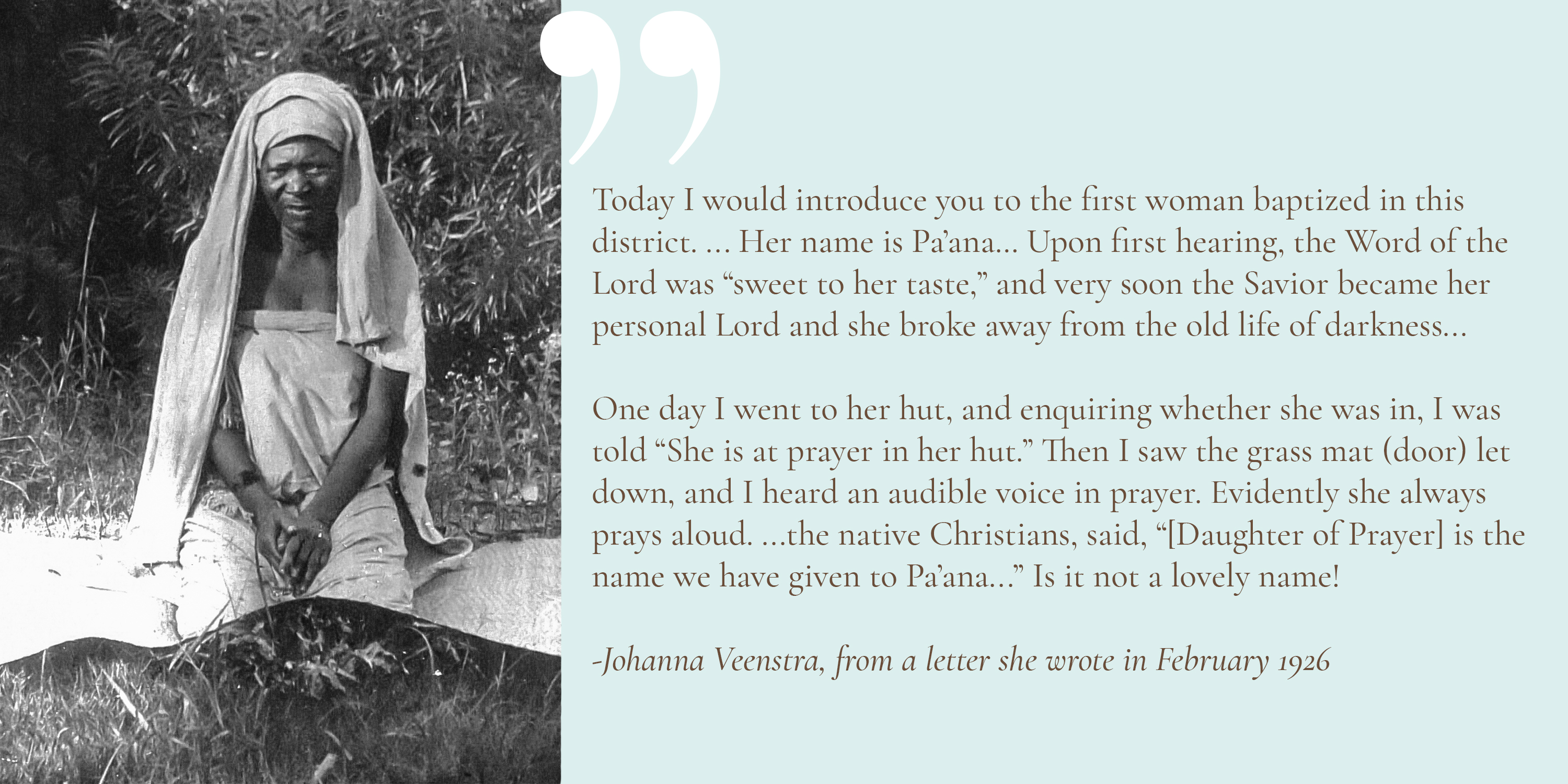 Building upon the Rock

Veenstra forged ahead where others didn’t dare to go. She considered herself and her missionary coworkers to be pioneers—not only because they worked in such a remote location, but also because they had a vision for a self-sustaining church.

“Our mission has for its ideal a self-supporting, self-governing, and self-propagating African Church,” she insisted in her book and the reports she sent home. She placed leadership, finances, discipline, and other elements of church life in the hands of the church’s elders.

“At the present time we are laying the foundation of the Church of Jesus Christ,” she wrote. “If the structure is to be permanent, the foundation must be strong and carefully planned. … May the Lord help us to build upon the rock.”

Legacy of Faith and Leadership

Veenstra became known for her relentlessness at home and on the field. She championed the urgency of mission work, telling her supporters of the millions who needed Jesus Christ. She continually asked her supporters to consider this great need in letters, reports, and presentations. “Is it nothing to you?” she asked.

Veenstra’s mentor, Henry Beets, recognized her monumental work and saw how important her legacy would be. “Miss Veenstra saw but a small beginning,” he wrote in his book about her life, Johanna of Nigeria. “The Lord is definitely showing where we are to carry the line of advance.”

Certainly, the long-lived legacy of faith and leadership Veenstra left is remarkable, especially considering that her life was cut short. In 1933, just 13 years after arriving, Veenstra died on the field of complications from appendicitis. But thanks to the capable Nigerian leaders she trained and the team of young women God called to join her, Veenstra’s work—God’s work—continued, and Christian Reformed involvement in God’s mission expanded around the world.

Resonate Global Mission director Zachary King said the agency still sees Veenstra’s legacy as a valuable example. “Johanna continues to inspire and encourage us as we seek to answer God’s call in our own lives. As your mission agency, Resonate Global Mission is committed to equipping the Christian Reformed Church to continue to follow God wherever he places us,” he said.

“Johanna was an advocate for all Christians, especially young people, to consider the calling God has for them. What’s more, Johanna worked to raise up female leaders in ministry—not only the young women she recruited to Nigeria from her own church, but also in the villages and towns of Nigeria.”

Perhaps the most important lesson Veenstra’s life teaches is that she was always confident in God, especially when she wasn’t confident in herself. Living out her exhortations to others to follow God’s leading, she wrestled with his will through prayer, devotions, and listening carefully to the words of her pastors, teachers, and counselors.

Like Veenstra, we can be confident that God has a role for us to play in his mission. Where is God calling you? Are you hearing God’s call to join him at home or somewhere far away? Wherever you may be on your mission to answer that call, Resonate Global Mission is available to equip you and support you for whatever God has called you to do, whether he’s called you into the known or the unknown.

This story was originally published by The Banner. You can learn more about Johanna Veenstra and how God worked through her by visiting www.resonateglobalmission.org/johanna.