Your Support for University Students in Mexico Is Crucial to Ministry 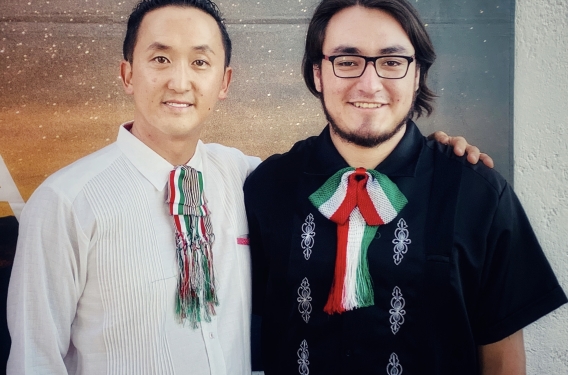 When Oscar committed his life to Christ, he needed an encouraging community that could help him grow—but he wouldn’t easily find that community on his campus in Querétaro, Mexico. That’s where you stepped in.

A Need for Support

Like many people in Querétaro, Oscar comes from a Roman Catholic background that is mixed with ancient Aztec beliefs. He knew that Jesus died on a cross, but he didn’t understand what that meant until he went to church with his brother. Captivated by the grace and love of God, he committed himself to following Jesus.

But as a new Christian, Oscar was confused. What was biblical and true about his earlier beliefs? What did he believe that was fabricated only by his culture? He needed encouragement and support—but he wouldn't easily find that support in his daily life. Very few students on his university campus are Christians.

God worked through you to provide for Oscar. Because you support Resonate missionary James Lee in his work with campus ministry in Mexico, James was able to disciple Oscar.

The Importance of Discipleship

On a scholarship to study engineering, Oscar spends a lot of time with his schoolwork. He wouldn’t be able to afford school without a scholarship, so he needs to keep his grades up. When he’s not studying, he’s either working or caring for his family, who lives an hour’s drive away.

But Oscar’s relationship with God is so important to him that he has also made time to meet weekly with James, who has kept praying for Oscar and mentoring him. James has encouraged Oscar to find time in his busy schedule to pray and read the Bible.

Continuing to meet with James, Oscar has learned more about God and has begun to feel more confident in the truth.

But there was still something missing.

Through James, Oscar began to feel the Holy Spirit speaking to him about living out his faith on campus—even in the midst of his busy schedule.

“There’s a purpose you are studying at the university,” James told Oscar one day. “And it’s not just to finish up four years of a major so you can get a good job. God has a purpose for you there.”

Oscar felt called by God to share the gospel on his campus. So he started a Bible study and invited students from the campus. Some students he invited had never even heard the gospel before.

“God has used Oscar to make his name known to other students,” said James.

Thank you for supporting Resonate missionaries like James who disciple students like Oscar to grow and share their faith. Your support has resonating effects as believers share their faith and God brings more and more people into relationship with him!