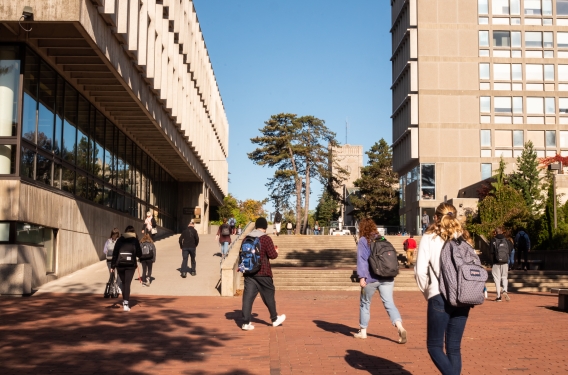 Resonate Global Mission partner campus ministers have noticed a shift on university campuses: students are no longer only asking the question, “How should I live?”

They are also asking, “Why should I live?”

The number of young adults living with anxiety, depression, loneliness, and other mental illnesses and challenges has increased in both Canada and the United States. Young adults report mental illness at a greater rate than older adults (see graphs). According to the World Health Organization, suicide is the second leading cause of death in 15-29-year-olds worldwide. 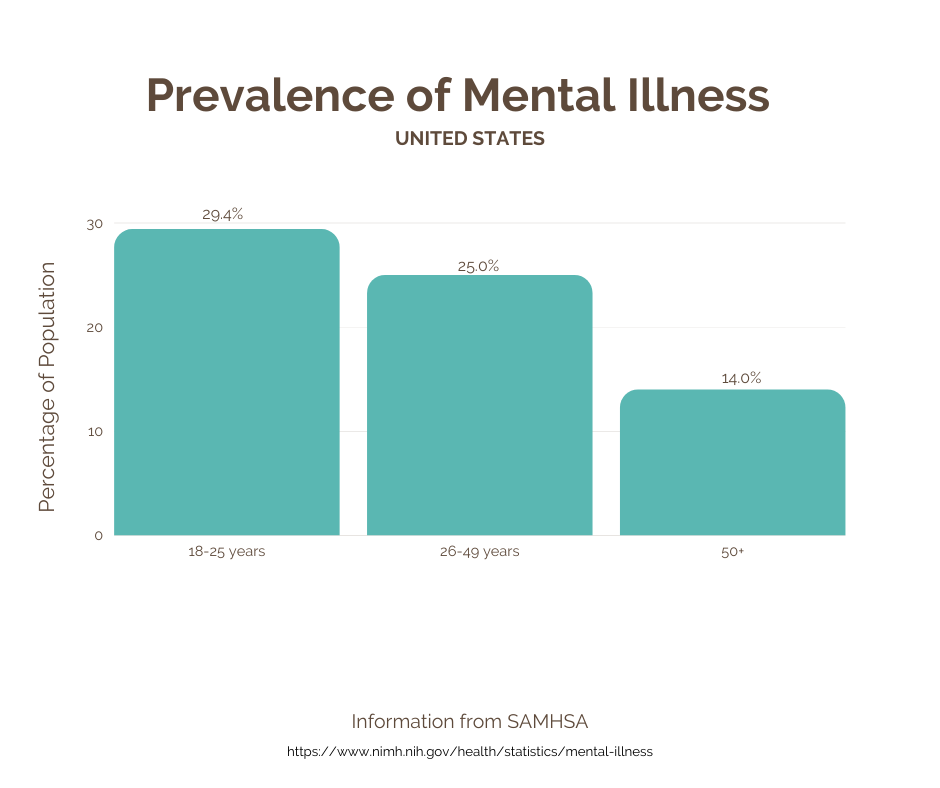 And those statistics are from before Covid-19. What has been coined by experts as a “mental health pandemic” has only been exacerbated by the coronavirus pandemic.

“What students generally tell me, and what’s evident in their faces, is a heightened level of anxiety, depression, and loneliness,” said Todd Statham, campus minister at the University of British Columbia—Okanagan.

“Students feel like the world has become bleaker in the last year,” he continued. “Last year, a young woman was graduating in engineering and she said, ‘I spent four years preparing for a job in the world and the world changed overnight. What am I going to do? What am I supposed to do now?’”

And it is not only the outlook of the future; it is also isolation and loneliness. Classes moved online. Many students moved back home with their parents or spent weeks alone in their dorm rooms, apartments, or houses.

“I have agonized in prayer for this year's freshmen class who, in a normal year, would have had multiple opportunities every week to meet other students, connect with upperclassmen, and build  a social network,” said Scott Stark, a campus minister at Campus Ministry at Grand Valley State University. “This year, I know of so many who spent ninety percent of their first semester in their dorm room, alone, only interacting with people on screen … they literally sat in their room alone for days at a time.”

Statham said that he listens carefully during conversations with students for any signs that a student might be struggling—like if a student said they slept until noon.

“I flag that in my mind and I come back to it,” said Statham. “Were you up late, or do you sleep ten hours a day? If they’re sleeping ten hours a day or more, that can be a sign of depression. Same with food. How are they eating? Are they eating well?”

Statham said that, especially during the coronavirus pandemic, he’s also found it necessary to be upfront about mental health in his conversations with students.

“I am just very direct now with questions about their mental health and trying to remove any stigma,” he said.

Many campus ministers are also trained to respond in crises, such as when a student seems to be a risk to themselves or others. The staff of Campus Ministry at Grand Valley State University are trained in the Question, Persuade, Refer (QPR) mental health crisis response. When Sara DeMoor first started in her role as campus minister at University of Guelph, she took an applied suicide intervention skills training with the university.

"I am prepared to respond when a student hints at suicide or hopelessness in a pastoral care conversation. Now, I know I can get them the help that they need in that moment,” said DeMoor. “It's so important to me that I'm not trying to help beyond my scope of practice, but am instead referring them to mental health professionals who are trained to respond to students in crisis."

Statham said that he will often provide a connection to a counseling center or walk with a student to their first appointment. It doesn’t necessarily mean that his pastoral role is over. “I find that generally what happens,” he said, “is I end up in a complementary role where they are seeing a professional mental health counselor and then I am providing spiritual support.”

But the line between spiritual care and mental health is critical.

Stark said that, beyond crisis intervention, the staff has a rule of thumb: “If it feels like you are in over your head, you probably are.”

“We are quick to refer students to either the university counseling center or a few local agencies that we have a good relationship with,” he said. “We specialize in discipleship. We can speak encouragement, we can bring them God’s Word, we can pray for God’s mercy. But our staff are not counselors and we don’t try to be.”

While campus ministry is not a cure for mental illness, it does provide support for mental wellness.

“Campus ministry provides a warm community,” said DeMoor. “One of the major issues for young adults, and older adults, that has been exacerbated—but not created—by Covid is loneliness. Just the feeling of not being known by others and not knowing others deeply. I think we’re created as image bearers to know and be known. Primarily by God, but also by each other.”

The university campus in particular is one of transitions and turnovers. Students graduate. Faculty move on to new teaching positions. But campus ministry? DeMoor describes campus ministry as a “steady presence.”

“Campus ministry offers a place to belong unconditionally—even for those people who do not identify as a follower of Jesus, or people who are curious,” said DeMoor. “It can be a safe place to land where students can just make friends, and they can just ask questions, and they can really be heard and known.”

Guelph Campus Ministry provided that space for Allie, a student who graduated from University of Guelph this year. When one of Allie’s friends died by suicide, Allie spiraled into depression and considered suicide. In the hospital, she found comfort in reading the Psalms and thought that maybe she could find a way through it with God. When she was released from the hospital and returned to campus, a friend invited her to one of Guelph Campus Ministry’s dinners.

“They took me as I was,” said Allie. “Just having that community and that safe, warm, loving space changed my life.”

Throughout the coronavirus pandemic, campus ministers and student leaders worked hard to continue providing a space where students could belong. They hosted many events and gatherings virtually, but campus ministers also followed institutional precautions and guidelines for meeting with students safely in-person and hosting socially-distanced, in-person events.

Statham, for instance, reached out to the student-led Muslim student association on University of British Columbia—Okanagan’s campus. “Just to see how they were doing,” said Statham.

“They didn’t have [an imam]. It was hard for them to keep tabs on their members. Their big draw was the feast at the end of Ramadan, which they weren’t allowed to do together. They were feeling quite distraught,” said Statham.

So, he invited them to join the campus ministry for a Christian-Muslim interfaith dialogue. The first one they hosted was specifically on addressing Covid-19 and mental health. It gave students an opportunity to share how they were doing.

“It started with everyone being really positive,” said Statham. “Both Christians and Muslims emphasizing their faith got them through. But at one point, one student very honestly said, ‘You know what? I hate this. I’m really struggling. My faith is in tatters.’”

“This facade fell off. This genuine lament came out.”

He said some students are not familiar with the concept of lament, or worry that lament is a form of doubting God. But both Muslim and Christian students said that they appreciated the opportunity to talk honestly about their challenges.

Providing a Space for Lament

Lament has been important at other campus ministries as well—something that predated the pandemic and will also outlast it.

DeMoor said that she has focused on spiritual disciplines this past year. She said these disciplines are important for growing as a disciple of Christ, but that these habits can also promote mental wellness. Guelph Campus Ministry studied and practiced disciplines such as gratitude, but also lament.

She believes the generation studying at universities right now face many different worries and fears that past generations may not have experienced. For example, DeMoor said that many students are “existentially afraid of environmental crises.” They wonder if the earth will still be around when they have children, or when they are older. Given the environmental destruction they see all around, will they be able to grow old?

“It’s very important to name the pain and the lament and the horrors that they are seeing on their Instagram feed everyday,” said Demoor. “The injustice. The racism. It’s so important for me as a pastor—not just as a pastor, but as a Christian on campus—to name those things and not pretend they don’t exist. Students are very attuned if you try to gloss over stuff.”

In the same way, campus ministry does not gloss over mental illness. Rather, campus ministers are working alongside universities to help care for and support students who are struggling. Campus ministers can help students take the first step toward healing, and the communities can also be a space where students find support as they heal.

“I often remind students we can live in paradox. The testimony of Scripture includes both confidence in God’s ultimate redemption in Jesus Christ and God’s people crying out to him in lament when they are in pain right now,” said DeMoor.

“It’s okay. You can bring your pain to God. Not sort of as a simplistic faith healing moment—although healing can certainly come and God can bring that healing—but we can live in that paradox.”

If you are thinking about suicide, or worried about someone else:

The National Suicide Prevention Lifeline is a hotline for individuals in crisis or for those looking to help someone else. To speak with a certified listener, call 1-800-273-8255.

The Crisis Text Line is a texting service. To speak with a trained listener, text HELLO to 741741. It is free, available 24/7, and confidential.