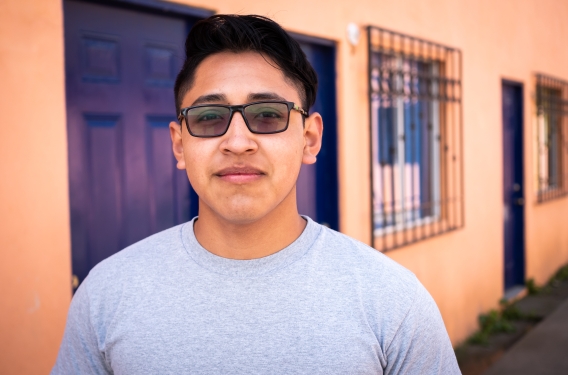 You gave a young teenager a way out of drugs and into a relationship with God.

Eleazar wasn’t interested in God or church. His parents were pastors in Tijuana, Mexico, but going to church and reading the Bible was just part of a boring routine for Eleazar. When his family moved to another part of the city for his parents’ ministry, Eleazar’s life changed—but not for the better.

Searching for a Rush

Eleazar started middle school and made new friends who messed around in class. Eleazar knew he shouldn’t hang out with them, but he was drawn to them. They seemed to have found a remedy for the drudgery of life.

Before long, Eleazar was ditching class. He and his friends jumped the school fence to play soccer or to throw rocks down a cliff at their rival school, provoking the students there to climb up and fight.

Then Eleazar and his friends met a drug dealer in the neighborhood. They started stealing so they could buy from him. “I liked the feeling that was rushing through my body,” said Eleazar. “But once the drug was done, I felt fatigued and drained. So I just kept taking those drugs.”

Eleazar’s parents, Israel and Elizabeth, could sense that Eleazar was spending time with friends who were a bad influence. Their fears were confirmed when Israel stumbled upon some marijuana hidden in the house.

“We tried to talk to him ... to prevent him from falling into this hole,” said Israel. But Eleazar’s relationship with his parents was strained. Israel and Elizabeth had a lot to manage while pastoring a church. They were so busy that their marriage was struggling—and so were their relationships with Eleazar and his brothers.

As Eleazar’s problem grew into an addiction, he wasn’t just consuming drugs—he was dealing them. One day Eleazar and his friend, Miguel, were sent on a job. A short walk to an area with heavy traffic, it was supposed to be a quick, safe job with a big profit.

But then an unfamiliar car pulled up alongside them. Music blared, bass throttling the car, as the driver rolled the window down. Eleazar’s blood went cold. A gun was pointed at them.

Eleazar didn’t understand why, but he didn’t feel grief over his friend’s death. “I just wanted to get out of there,” he said.

He ran off, took the bus home, and went to bed as if it had been a normal day. Years passed. Nothing changed. “I just kept this rhythm,” he said. “I didn’t care about anything. ... I was high all the time.”

But because you sent Resonate missionaries Abe and Elaine Lee to Tijuana, God was able to work through them to give Eleazar a new rhythm.

Abe and Elaine met Eleazar’s parents first. They invited Israel and Elizabeth to participate in seminars that you made possible through your support, including a marriage seminar in which they were able to identify challenges in their marriage. They started working on improving their relationship. As time went by, they became kinder and more authentic in their interactions with one another, their children, and their church members.

“I started feeling,” said Eleazar, “feelings that I hadn’t felt in a long while.”

A hurricane of emotions overtook Eleazar. He felt hurt, angry, ashamed, and lonely. But reading Scripture and hearing Abe and Elaine talk about the healing power of God, Eleazar also felt hope. He realized he could have lost his life, but God had protected him time and time again.

“I decided to give God a chance,” he said.

A Flipped Heart and Soul

Eleazar doubted whether he would feel the same hope in God after the seminar was over, but as the days went by, he only grew closer in relationship with Christ. Now 19, Eleazar is fervently sharing about the love of God.

“God touched my heart and my soul, flipping it around,” said Eleazar.

Eleazar’s friends still look for him, asking him to deliver drugs for them again, but Eleazar refuses. He tells his friends that God loves them, and he’s seen a lot of changes in their lives too. Eleazar also spends his time riding his bike around Tijuana, meeting kids who are in middle school and trapped in the same kind of lifestyle. Eleazar tells them they are never alone and that they can always rely on God.

Thank you for providing an opportunity for Eleazar to heal and know that God loves him. “I am thankful for God being in my life and changing it,” said Eleazar. “He is working in my heart every single day.”