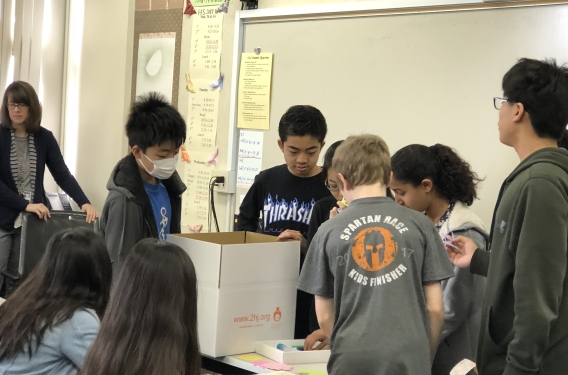 Growing up in a family that did not believe in God, Christianity was not on Kurt’s radar. But when he began attending Christian Academy in Japan (CAJ), where many Resonate missionaries teach, the Holy Spirit stirred inside him.

CAJ does not only teach children for missionaries. The school also attracts both local and expat students who come from non-Christian homes.

Without faith in a gracious God, the effects of Japan’s honor and shame culture weighed heavily on Kurt. He had bags under his eyes from worrying about grades. When he got a bad mark, he could not eat or sleep until he told his parents. Just one wrong answer could make him feel discouraged about his future. And Kurt was not the only one—a number of CAJ students struggle with suicide, depression, and self-harm.

But God uses CAJ to encourage these students and bring them into relationship with him.

Not only are students like Kurt learning in classrooms alongside peers and teachers who are believers, but CAJ approaches education differently than traditional education in Japan. Rather than focusing on rigid adherence to precise instruction with achievement-oriented results, Kurt was encouraged to question, discover, and discern.

“Our teachers challenge students to think about their spiritual journey and what that means,” said Winnie Langelaar, a Resonate missionary and middle school principal of CAJ.

And that’s exactly what Kurt did. Through his Bible classes and conversations with his classmates, he became curious about Christianity. Last year, when he was in eighth grade, he asked one of his classmates about being a Christian. His classmate was eager to mentor him and took Kurt to church and youth group. As Kurt learned more about Jesus, he began to sense that Christianity was the truth.

“It is always exciting when I hear students who want to accept Jesus,” Winnie said. “I believe that the Holy Spirit was moving [Kurt] and [used] his friends to share the Gospel with him.”

But that’s just the beginning of Kurt’s story.

Teachers mentor students as they grow in their faith and encourage them to live out their Christianity in their actions and relationships. Because of CAJ’s support, Kurt brought his newly-forged faith home. This past year, Kurt’s mother approached Winnie for help. “I am not a Christian,” she said, “but my son feels moved to be baptized.”

While Kurt’s mother is not yet a Christian, she knew the teachers at CAJ would answer her questions about faith. Winnie was able to help direct Kurt’s mother to a church and share what it means for Kurt to be baptized.

Thank you for supporting students like Kurt and faculty like Winnie who mentor them. Kurt was baptized and continues to attend church and youth group activities with his friend from CAJ. Praise God for his faith, and please pray that he continues to grow in his faith and that God uses him to bring his family to Christ.