‘You Will Be the Ones’ 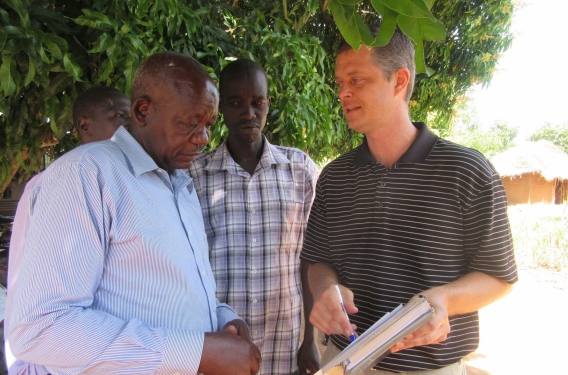 Resonate Global Mission missionary Josh Shaarda has prayed for years that God would raise up more people to spread the gospel and share the hope of Christ.

“God is answering that prayer through ministry in prison,” said Shaarda.

The Soroti Prison in Uganda is packed with hundreds of men in bright yellow uniforms. They are sent to the prison from cities and villages all over Uganda.

Their lives have not been easy. Some have struggled financially and couldn’t repay a debt. Some felt they had no other option but to steal. Some have been falsely accused of crimes. Some are there for murder or manslaughter.

But there’s a church that meets under a mango tree in the prison courtyard, and many men have found hope in Christ there. When Shaarda offered Freedom in Christ discipleship training to the men of the church, they jumped at the opportunity.

“They have grown to cherish their identity in Christ,” said Shaarda. “They understand that their identity comes from what Christ did for them, not from what they did … they have learned that truth sets them free.”

But transformation doesn’t stop within the walls of the Soroti prison.

Sent out to Declare Freedom in Christ

One day, a man who was recently transferred to the Soroti prison sat through the training.

“If only you could bring this teaching to our whole country,” he told Shaarda. “It would change our nation.”

Shaarda asked five men in the training where they were from—all were from different parts of Uganda. When they left the Soroti prison, they would go miles away in different directions.

“This teaching will go to the whole nation,” Shaarda told the man. “But I am not the one to bring it. I am equipping you ... you will be the ones to bring it.”

The man took that revelation to heart. Eight months later, the group was gathered for another training and he told the others: “We need to listen well because we are being prepared to take the good news to our people.”

This man’s prison sentence will be over in three years, and he’ll join other men Shaarda has discipled—three have started Bible studies in their home villages; one started a primary school to teach kids how to live for God; and another keeps calling Shaarda, asking to be sent out.

“He is ready to go to new places to spread the message of Jesus,” said Shaarda.

That’s the life-transforming power of the gospel.