You Sent More than 30 New Missionaries 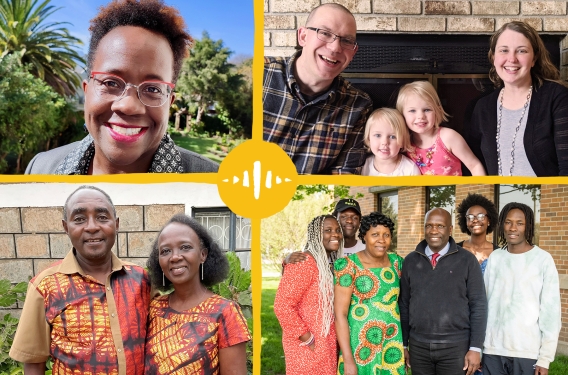 We're giving thanks for a growing, gifted team of missionaries working throughout the world.

Recruiting missionaries became one of our goals and priorities. Churches also joined in the effort by getting the word out and encouraging potential missionaries to serve.

After years in which it seemed that few people were interested in serving overseas, we're giving thanks for a growing, gifted team of missionaries. Within the past year and a half, you have sent more than 30 new missionaries to the field through Resonate.

“I love seeing who God has been bringing our way,” said Nalini Suganandam, mission support manager at Resonate.

A New Way of Working in the World

God is working in an exciting new way through Resonate’s ministry. We're welcoming staff members who have come not only through traditional avenues—such as long-time family ties to the Christian Reformed Church—but also through collaboration and partnerships with staff on the ground.

“This has widened our circle and allowed for conversations that invite us to hear and learn from different stories and experiences, experiment with new methodologies, ask different questions, work with new metrics, and grow in diversity in ways that allow us better to live into God’s picture for the church,” said Nalini.

“This is exciting to me as we work to [include] voices that don’t often get heard,” she continued. “And we have this beautiful gift to hear well and to live out from that learning—this is part of God’s transforming work and our witness to God’s ongoing mission.”

Ministering with Refugees in Uganda

One such individual is Pastor Anastaze Nzabonimpa. In 2001, Anastaze arrived in Uganda as a refugee from Rwanda. After a month, he and his family moved to Kampala City, Uganda, where they stayed until they moved to the United States in 2015. Now Anastaze and his family are returning to Uganda to minister with refugees and other groups of people who are vulnerable and marginalized.

“Finding food, shelter, and medication is the most challenging problem for refugees,” said Anastaze. “Before coming here, we used to tell God that if he helped us to come out of these conditions . . . we would go back and serve the refugee community in Kampala.”

God heard their prayers, said Anastaze. When he and his family moved to the United States, he had the opportunity to earn his master of divinity degree at Calvin Theological Seminary and is currently in the process of being ordained as a minister of the Word.

“I know God was preparing me to serve him back in Uganda,” said Anastaze. “Now, this is the time. This is the moment. Resonate is sending me back as a missionary.”

Mwikali Wambua is another missionary joining Resonate’s staff. A longtime school teacher in Kenya and Canada, Mwikali participated in Educational Care training facilitated by Resonate missionaries. She is a gifted leader and is passionate about providing a Christ-centered education for her students. She found the Educational Care training so valuable that she joined Resonate’s staff in Kenya as a Christian education coordinator. Now she is stepping into a bigger role to manage the training throughout eastern Africa.

“Joining Resonate’s mission in this new role invites me to a cherished space of teaching, learning, and growing together with other educators and children,” said Mwikali. “My greatest excitement is when I witness God’s transforming work as educators and children come to faith and Jesus . . . and when schools begin to evolve into peaceful environments for learning and working.”

Dr. Selena Headley also started serving with Resonate this year. Based in South Africa, she works as the Urban Training Collaborative coordinator throughout eastern and southern Africa. In this role she facilitates capacity-building and learning opportunities for people who are working in poverty alleviation, justice, and community building.

“My passion in ministry is to serve with local leaders who seek the shalom of all who live in the city,” said Selena. “Together we’ll explore and foster positive changes in the spiritual, social, and material well-being of people in the rapidly growing cities of Africa to build God’s beloved community.”

Reaching the Unreached in Japan

While several missionaries have joined Resonate through pre-existing connections on the field, we're also excited that individuals and families with longtime ties to the Christian Reformed Church continue to follow God’s call to serve on mission.

For several years, Resonate staff searched for and asked God to send missionaries to fill a role in Japan. The people of Japan are one of the largest unreached populations in the world. Perrin and Jodi Werner and their family recently joined the Resonate team in Japan; they will be working alongside local churches and supporting and equipping them for mission.

“We are humbled to be a part of the long history of faithful partnership between the CRC and the Reformed Church in Japan,” said the Perrin and Jodi. “We stand on the shoulders of the many faithful missionaries that went before us. We’re also grateful to serve in a place that is still unreached with the gospel. There’s a big need for missionaries here, and we’re excited to do our part.”

Thank You for Joining God on Mission!

“There is a critical need for continued support of our missionaries—and especially for those who join us through recent connections to Resonate,” said Nalini. “They have an added challenge in developing strong connections to a sending church in North America, but we've seen that it's possible and impactful when there is intentional investment from both sides for face-to-face connection, relational engagement, and opportunities to learn about and with each other.”

“It takes time,” Nalini added, “but it's another beautiful invitation and gift to join God on mission.”

Do you or your church want to support a missionary? Start your partnership at resonateglobalmission.org/support/missionaries.