The Warmth of a Home and Community 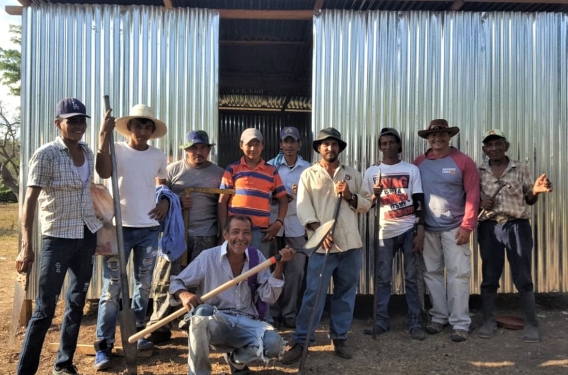 With Nicaragua’s rainy season fast approaching, Luis and Alba Lopez knew their family was in a dire situation—their roof wouldn’t be able to withstand the rainstorms.

A family of four, the Lopezes lived in a small, cramped house. While Luis worked hard making and repairing shoes, he couldn’t afford materials for a new roof.

Then Resonate Global Mission missionary Jairo Solano visited the local church. Church members approached Jairo, expressing worry for Luis, Alba, and their two sons. As a result of his ministry through Resonate, Jairo was in a position to hear the concerns of the community and organize them to help the Lopez family.

Jairo crunched the numbers and sent out a newsletter asking for prayers and donations to provide the Lopezes with a proper roof. They would need about $350; the community donated $750.

It was more than enough for a roof—it was enough to build an entire house. “Since the Lopez family and their church were hoping to do the labor themselves, we were able to help them build an entirely new home with this money,” Jairo said.

Working together, 15 church members built the Lopezes a new house. The most difficult part of the building process was getting the building materials to the location. Solano’s truck could only bring them so far before they had to carry the materials themselves. “Thankfully, there were a lot of people willing to help with the job,” said Jairo.

The community then took their help one step further: women from the church banded together, each pulling ingredients from their homes to cook meals for the volunteers.

Within two days, the Lopez family had a house with a sturdy roof and more space. The Lopez family was overwhelmed with gratitude. “They also offered to help if we had other needs or projects to be done in the community,” said Jairo.