Sending Disciples into the Marketplace 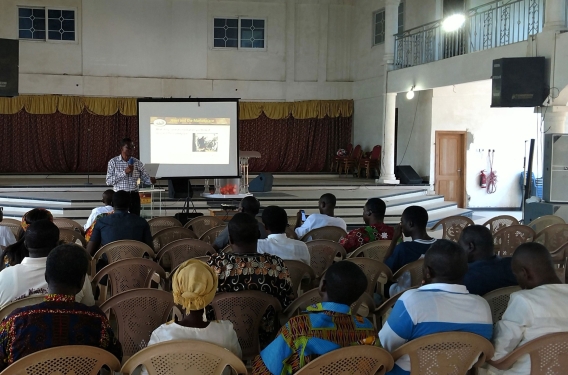 Seeing a university president sitting in a school desk and taking an exam isn’t an everyday sight, but that’s exactly what Dr. Nelson Ahilijah did.

President of Ghana Christian University College, Ahilijah is one of many leaders who trained in Ghana with Discipling Marketplace Leaders (DML), an international ministry that focuses on bridging the gap between the marketplace and Christ by teaching people to do their work for God’s glory.

“Too often, churches are trying to get people into the building, rather than releasing them to be the church Monday through Sunday ... Our work can be an act of worship throughout the week,” said Renita Reed-Thomson, a Resonate Global Mission missionary who serves as DML’s founder and international coordinator.

Renita equips and empowers pastors, business owners, and other leaders like Ahilijah to make disciples in the marketplace.

“[Ahilijah ] has believed business as mission is critical for the church,” said Renita, “but felt he lacked the strategic tools to help make it a reality.”

So Ahilijah joined Renita for DML’s “Training of Trainers.” Renita equipped him with the tools essential for training others in empowering, equipping, encouraging, and discipling business owners.

Starting in his university’s classrooms.

“If the principles taught in the DML curriculum were to be taught in schools...as well as churches, there would be a huge impact in closing the gap that exists between the sacred and the secular,” said Ahilijah . That conviction is why he, the university president, sat for the training and the exam (which he passed).

Now Ahilijah has a vision for teaching DML principles in his university’s classrooms. He wants professors to disciple students to be the hands and feet of Jesus in their communities no matter their profession or program of study.

“The message of DML is not a new or hidden truth,” said Renita. “It is simply a forgotten truth. This becomes obvious as we watch the responses of pastors, [who] look at the Bible through a different lens. The new lens sees God has created us to do business and has used business people throughout the Old and New Testament to further his kingdom.”

Thank you for supporting Resonate missionaries like Renita who go and make disciples of all nations and all professions to expand God’s kingdom. Your investment has a ripple effect that will move through this entire university and beyond!