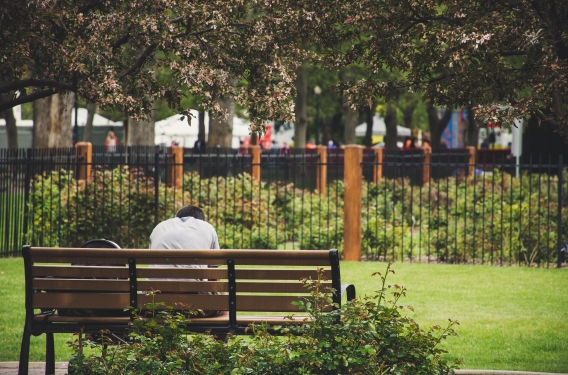 André* did not want to live anymore.

But then he met Jesus.

Resonate Global Mission missionaries Pablo and Sheryl Canché partner with a ministry in Mexico City, Mexico, that serves people who live on the streets. Pablo noticed André one day while they were singing songs in the park where André spent much of his time—his clothes were dirty, he had a bottle of whisky in his hand, and he stared listlessly at the ground while mumbling to himself.

Pablo sat down beside André and asked him how he was doing.

“I hate this life,” André said.

André said he drank too much. Sometimes when he drank, the anger inside him lashed out. He hurled insults, threw glass bottles, knocked over chairs. His family did not want him around, and he had nowhere else to go, so he called a park bench home. He knew he should stop drinking, but the alcohol was an easy escape from the pain of his reality. He was addicted.

“What are your options?” asked Pablo. “What can you do?”

André stared at the ground. He thumbed the cap of the whisky bottle in his hand. He was not sure there were any more options for him.

And then Pablo said: “How about starting a new life?”

As the worshippers in the park strummed guitars and sang songs of praises, Pablo told André about Jesus. He told André that Jesus died to take away the pain, despair, and hardship of his present life and exchange it for a new life full of joy, hope, and prosperity.

André lifted his head. He looked Pablo in the eye. For the first time in a long time, André had hope. He told Pablo he wanted to follow Jesus and walk in this new life. He took the first step and emptied the bottle of whisky he bought that morning, and Pablo connected him to a pastor of a local church. André stood a little taller as shook hands with the man who would help him on his new journey with Christ.

“The gospel is life-changing,” said Pablo. “It gives me so much joy for someone who is seeking death to find life.”

Thank you for supporting Resonate missionaries who go out and share the love of Jesus with people who are living with no hope. Please pray for André as he boldly walks into this new life. Ask God to renew his mind, restore his relationships, and provide for him.