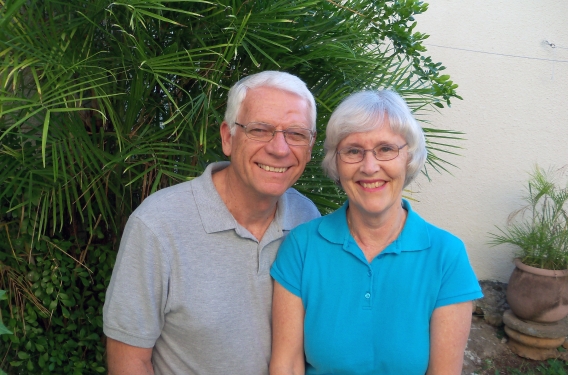 Resonate volunteer John Wind had just begun reading about the coronavirus in the news—in March, before the response to the pandemic became widespread in North America—when he became ill with it himself.

It’s impossible to know exactly how the Winds were exposed to the virus, but it likely happened in March while traveling to their home in Merida, Mexico, from a Resonate event that took place before shutdowns and travel restrictions went into effect. Thankfully, no other Resonate staff or volunteers have reported symptoms related to that event.

Going through COVID-19 was unnerving for John, who tested positive for the virus, and his wife Shirley, who experienced symptoms but did not get tested. “We were not concerned that this would affect our travel plans much less that we would contract the virus ourselves,” he said.

The symptoms came on suddenly—first, extreme back pain that kept John awake at night. Later, a fever and cough prompted him to get tested, on April 1st. The next day, results came back positive for COVID-19. Over seven weeks and still counting, pain, fatigue, weakness, and other symptoms of the coronavirus have kept them confined to their home. The long and serious illness has been frustrating and discouraging for both John and Shirley.

“I began feeling panicky watching my otherwise strong and healthy husband sick, weak, and in pain,” shared Shirley. John shared that the most difficult aspect for him was isolating himself from Shirley for the first two weeks.

But the Winds took comfort in the promises of God and support from Resonate.

“We praise God for his healing touch on our lives,” they wrote. “We have been overwhelmed by God’s infinite love for us demonstrated through his people, the church.”

In addition to friends in the area who prayed and cared for them, delivered groceries, and ran errands, John and Shirley are thankful for encouragement, daily prayers, and support from Resonate. Through spiritual encouragement and prayer, they were able to stay rooted in God’s promises.

John and Shirley are well on their way to recovery now, but the community they live in—Merida, Mexico—is in a critical stage of the pandemic. John and Shirley ask for your prayers for the people there.

You can read John's reflection on recovering from coronavirus here.

This article was originally published on crcna.org.