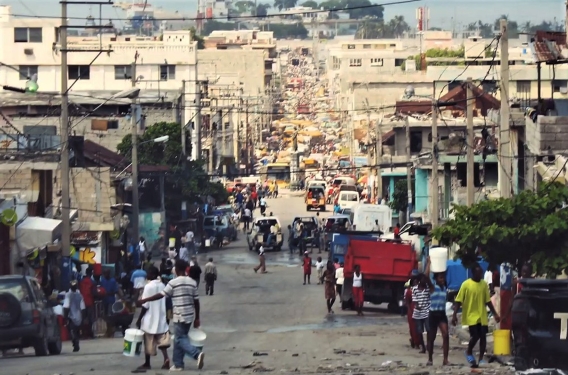 Resonate Global Mission missionaries Johnny and Kim Gryglewicz are asking you to join them in prayer for Haiti. Protests and road blockades throughout the country have made daily life and ministry difficult.

Protests first started in July 2018 when the government announced an increase in fuel prices following pressure from the International Monetary Fund to limit the government’s gas subsidies. In some cases, gas prices rose by more than 50 percent. Many people also believe that Haiti’s government is plagued by corruption, and a report accused political leaders of mismanaging funds. Protests have since broadened in scope and an opposition movement is demanding the resignation of Haiti President Jovenel Moïse.

Johnny Gryglewicz has heard from many people that they’re not going to accept anything less than the president’s resignation. “I think they’ll keep protesting until he steps down,” he said.

Haitians have described their country has being on “lock-down” for weeks. Roads are blocked with abandoned semi trucks, fallen tree branches, burning tires, and other man-made barricades. Most schools have closed, businesses have shut down, public transportation has halted, and fuel shortages have left many people without food or water.

“In an area where there’s not a lot of margin of living, the conditions have been bad—not only has inflation been around 20 percent but the cost of living has increased significantly,” said Gryglewicz.

Resonate, Back to God Ministries International, and World Renew all have office staff and ministry partners in Haiti. The CRCNA has a Crisis Monitoring Team that has been monitoring the situation closely.

This past February, Resonate missionaries temporarily left the country when protests caused a fuel shortage at the island nation’s airports.

No staff members have been harmed in the protests, but the conflict has made ministry challenging. The CRCNA office is open on days when the neighborhood is clear of protests or violence, but staff members may not be able to safely commute to the office from their homes in other parts of the city.

“Everyone needs to assess their situation and go [into the office] when they can,” said Gryglewicz. “The day-to-day has been very up and down.”

“We have the money, we have the materials, but we can’t get the materials out in the countryside because the roads are blocked and it’s very dangerous to go,” said Gryglewicz.

He said the future is uncertain and he’s not sure when protests will subside.

“Life hasn’t been easy in Haiti, a place where people are already struggling economically,” said Resonate director Zachary King, who served in Haiti with his family for 12 years prior to leading Resonate and who also serves as part of the CRCNA’s Crisis Monitoring Team for Haiti. “Our hearts ache for the people of Haiti who are finding it difficult to care for themselves and their families.”

Gryglewicz said that he feels helpless but has been challenging himself and the CRNCA staff in Haiti to connect with ministry partners throughout the country in order to offer encouragement and support.

“I think you have a tendency in times of stress or danger to kind of shrink in and build up your defenses and kind of hunker down,” he said, “but our staff has been challenged to reach out to our partners, give them an ear, and meet up with them if possible. One of the best ways to minister to people is to be present. That can mean simply listening with them and sitting with them.”

It hasn’t yet been possible to meet up with ministry partners, but we place our hope in a God who promises peace on earth. Pray for the conflict in Haiti. Pray for wise counsel for the country’s leaders and protection for the people. Ask God to provide for those who are hungry, thirsty, and hurting. Pray for strength, encouragement and safety for CRCNA staff, ministry partners, and their families.

If you have a heart for Haiti, you can sign up for prayer letter updates from Johnny and his family here.