Not a Foreign God 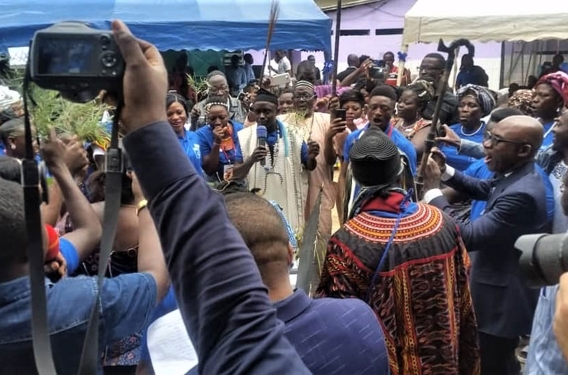 The Mbembe people of Cameroon may live in different cities and villages, but they all share one thing in common: their language. “Mbembe is their language and it also defines a lot of their culture and who they are,” said Resonate Global Mission missionary Allison Westrate.

But until recently, it seemed like God didn’t speak their language. Not until they held Mbembe translations of the New Testament in their hands.

The Need for a Mbembe Translation of Scripture

Many Mbembe believers in Cameroon worship in English, Pidgin English, or French depending on where they live in the country.

“They have Bibles in those languages and many speak those languages fluently and have vibrant relationships with God and a solid knowledge of his word,” said Allison. “However, when you ask someone … what it is like to hear God’s Word in their language, they just light up. It’s different. It speaks to them more deeply.”

There are also Mbembe speakers who don’t speak English, Pidgin English, or French fluently—or at all. Instead, they must rely on translations in the church, which aren’t always accurate.

As speakers try to keep pace with the Scripture readings and decipher the nuances of language, they inevitably make mistakes, such as translating “people were selfish” as “some women were selling fish.” The inaccurate translations are confusing and frustrating for people who are trying to learn about God or grow in relationship with him.

That’s why missionaries like Allison are there—to support Bible translation.

“Translations are a group effort,” said Allison. Allison and her husband Tony partner with Wycliffe by teaching at Rain Forest International School. They teach children of missionaries so translators can stay on the field to complete their work.

“Many missionaries would leave the field when their children got into secondary school if they didn’t have our school as an option,” said Allison.

Allison and Tony are one part of a team that makes translation work possible—and you are part of that team when you support Resonate missionaries like the Westrates. Bible translation takes a lot of skilled workers and a lot of time, but it’s so worth it for people to be able to fully understand the truth of Scripture in their own language. Many people are also more open to the message of the gospel when they can hear or read it in their own language.

One day, after years of hard work, people from many different villages across Cameroon were gathered for meetings and a supposed New Testament celebration. “Some waited eagerly, while others sat with arms crossed, not really knowing what this (celebration) was about,” said Allison.

But then men entered carrying a box full of Mbembe translations of the New Testament covered in traditional fabric on their shoulders. The crowd erupted into cheers.

“This is the exact way people from the Mbembe community would bring in the biggest animal from a hunt or plunder from a battle in preparation for a huge celebration. They now understood that the biggest “treasure” of all—the Mbembe New Testament—had arrived!” said Allison.

“We were lost, but now we are found. God has finally decided to glorify himself by speaking our language!” said Lillian Engoro, a Mbembe speaker.

Lillian and other believers purchased Bibles and alphabet charts, which will help them learn how to read and write in Mbembe.

“Many Mbembe Christians have read and studied the Bible in English for years, but when they hear the words in Mbembe, it speaks to a place deep in their hearts,” said Allison. “They are significant enough to (God) for him to speak in a way they can understand. He is not a foreign God.”

Thank you for the role you played in this translation by supporting Resonate missionaries Allison and Tony Westrate! Please pray that God will speak to Mbembe believers as they read Scripture in their heart language!