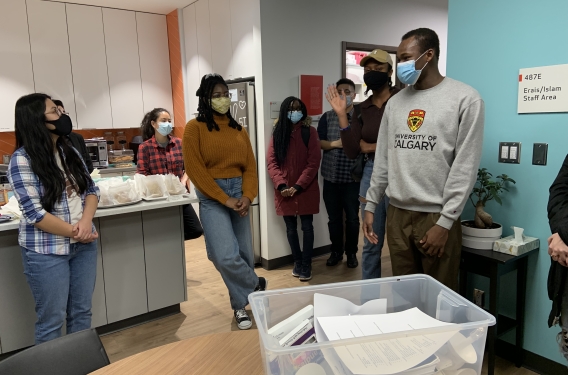 The University of Calgary in Alberta, Canada, has been working toward Indigenous reconciliation. One of your Christian Reformed campus ministries is supporting and joining that work.

“Since Christians were at the center of much of the harm and genocide toward Indigenous people in Canada, it is critical that we learn the truth, build real relationships with Indigenous people, and do our part in reconciliation,” said Layne Kilbreath, one of your Resonate Global Mission partner campus ministers at the University of Calgary Campus Ministry.

By now, the story is familiar: In the past, many Indigenous children were forced into residential schools where they were required to conform not only to Western ways of living, but also to Christian beliefs, values, and traditions. Children were dressed in uniforms. Their hair was cut short. They were often given numbers instead of called by their names. They were forbidden to speak their language or practice their customs.

The University of Calgary’s Office of Indigenous Engagement does not want to follow the same path in today’s education.

“The university is not trying to assimilate Indigenous staff and students,” said Layne. “It is exploring how to walk parallel paths together in a good way.”

In fact, “walking parallel paths together in a good way,” or ii'taa'poh'to'p, is the department’s motto.

This work is vital for the University of Calgary’s Campus Ministry as well. Your Resonate partner campus ministers often share that students wonder how the Christian faith relates to important challenges and issues in culture and society today, including social justice and reconciliation. Indigenous reconciliation is one of the important issues that students, faculty, and staff on campus are wrestling with.

Since Christians were at the center of much of the harm and genocide toward Indigenous people in Canada, it is critical that we learn the truth, build real relationships with Indigenous people, and do our part in reconciliation.

Your support of campus ministry through Resonate helps make it possible for Christian Reformed campus ministries to join in that work. By joining in that work, campus ministries are adding a biblical perspective as they engage students, faculty, and staff on an issue they already care about. As Layne explained, students are often not wondering how Jesus’ gospel makes a difference; they are questioning whether the gospel does make a difference. Being part of the discussion about Indigenous reconciliation is an important part of Christian witness.

The work toward reconciliation will take a long time. So far, Layne shared that the campus ministry is listening and learning. Layne has invited and encouraged chaplains from a variety of ministries on campus to attend Indigenous events and learnings. This academic year, he and the other chaplains are hoping to invite Indigenous elders to teach them and their students about Canada’s history with Indigenous people.

“It is important that as our chaplaincy loves (the University of Calgary), we learn to love what she loves,” Layne said. “In this case, that manifests in a desire to learn and tell the real history of the Indigenous people and learn from Indigenous siblings and their ways of knowing, being, and doing.”

Thank you for partnering with the University of Calgary Campus Ministry and helping the community to join in this important work. Thank you for being part of the process of reconciliation so Christians can better represent the gospel in the world.