The Future of Nigeria’s Women in Ministry 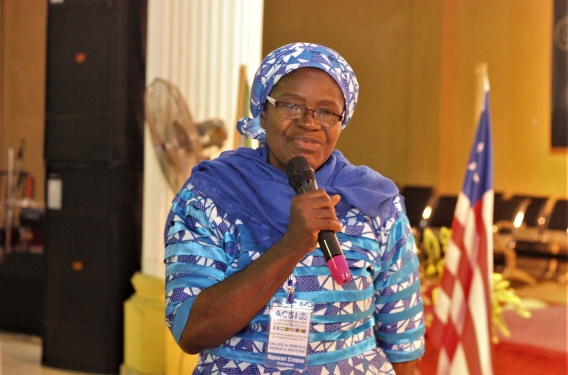 The Christian Reformed Church is celebrating an important anniversary this fall: 100 years ago, Johanna Veenstra took a giant leap of faith. In 1919, she stepped onto the steamer Mauretania and crossed the Atlantic to Nigeria. She not only became the CRC’s first female missionary, but the first missionary to serve outside of North America.

Together with you, Resonate Global Mission is continuing her work of answering God’s call to join him in mission, equipping young adults to serve, and raising up female ministry leaders. This blog, written by Resonate missionary Sarah (Kluitenberg) Aderemi, is part three in a series of reflections on how the CRC continues to live out Veenstra's legacy today. Read part one. Read part two.

Mrs. Ezepue never thought of starting a school in Rivers State, Nigeria. She was trained in her younger years as a teacher and was working in the public school system when her husband came home one day with a burden that God had laid on his heart—to raise up a new generation.

As a pastor, he didn’t quite know what that meant. Mrs. Ezepue felt a strong impression to follow the message that God had laid on her husband’s heart and to start a school that would raise up the next generation to follow Christ whole-heartedly.

She started the school on September 18, 2000 with only one child. She began with pre-nursery to primary three. Gradually, year by year, the school grew. This current school year, the population is over 400 students from pre-nursery to secondary school. The greatest joy for Mrs. Ezepue has been seeing God at work in the lives of the children.

Despite the fact that she did not grow up going to Christian schools and was not trained in Christian education, God has used her to shape the lives of her students to stand out both academically and in their character.

Serving as a Resonate Global Mission missionary with the Association of Christian Schools International (ACSI), I have the privilege of working with Mrs. Ezepue and many other talented female Christian leaders in education. Mrs. Ezepue said ACSI has been a great resource to her and her school in gaining a deeper understanding of Christian education. She has found what ACSI offers to be more malleable and can easily be integrated into the Nigerian curriculum that the government requires.

Mrs. Ezepue is one of many women who own schools in Nigeria. Education, both primary and secondary, is a female-dominated field and women are at the forefront of seeing Christian education flourish in Nigeria. Even in an all-boys school, it wouldn’t be out of the ordinary to find a woman as the head of school. The ministry of Christian education has opened up doors for women in Nigeria to flourish in ways that other ministries might stifle.

"The fact the women have gained great respect in the ministry of Christian education gives us hope for what the future might hold for women in ministry here in Nigeria."

The role of women in Christian education ministry here in Nigeria is an anomaly compared to other ministries like the church. In Mrs. Ezepue’s church, they have a woman as the archbishop, the first and only time she has witnessed a woman in that position. Nigeria is a highly patriarchal society, with many tribes supporting male dominance and privilege, despite the society’s dependence on the labor of women. This is interwoven into the fabric of society. Only a man can bail someone out of jail; a woman could not bail her own husband out of jail. When my husband and I got married, the court official, who was a woman, told me that I am now my husband’s property. In the church, it is often the woman’s fault when her husband commits adultery.

The fact the women have gained great respect in the ministry of Christian education gives us hope for what the future might hold for women in ministry here in Nigeria. Despite the uphill battle to break down the chains of patriarchy that bind many women, it should only give us hope to see women, like Mrs. Ezepue, shaping the lives of the future generation through the ministry of Christian education.  Women in Nigeria are at the forefront of building up a generation of innovative Nigerians who desire to serve Christ and serve others in all spheres of life.

Written by Resonate missionary Sarah (Kluitenberg) Aderemi. Sarah serves with the Association of Christian Schools International (ACS) in Nigeria, equipping teachers and school administrators to better share the gospel and disciple students in their schools. This post was originally published on The Network.