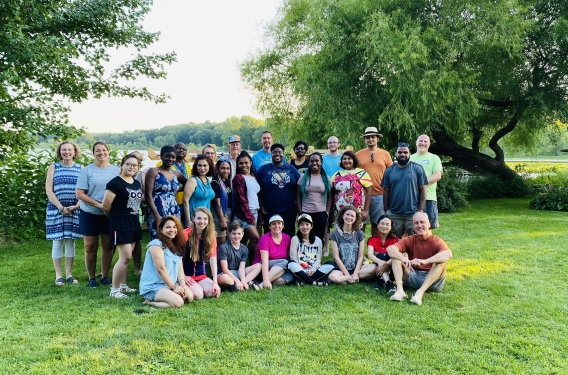 Aisha knew a few stories from the Quran and would pray sometimes, but she never really thought that she could have a personal relationship with God. But then she connected with one of your campus ministries and heard the gospel.

“It’s kind of a long journey that brought me toward giving my life to Christ,” said Aisha.*

Aisha had moved to Michigan from Pakistan to study toward a Ph.D. at Western Michigan University. At the invitation of a friend, she connected with several campus ministries, including International Campus Ministry—one of your Resonate partners. One day her friend asked her about religion and what she believed. Aisha shrugged.

Aisha knew a few stories from the Quran and would pray sometimes, but she never really thought that she could have a personal relationship with God. That day, Aisha heard the gospel for the first time. And while she was interested, she had a lot of questions.

“I just need a lot of evidence,” said Aisha.

Drawn to the Gospel

Something about Christianity drew Aisha’s attention. As years passed, she continued attending campus ministry events, including a weekly lunch that you have helped to make possible. She also met one-on-one with your campus minister Laura Osborne. Aisha also started reading the Bible. She studied Scripture on her own as well as with campus ministers and other students. Then she started worshiping with a local church.

“I kind of started reflecting on other parts of my life,” she said. “I had a constant feeling that there was something lacking in my life. It was a constant lack of peace. It was all chaos.”

Aisha was drawn to the peace she witnessed in the lives of many Christians—but she was hesitant to commit her life to Christ.

Then, about six years after she had first begun exploring Christianity, she traveled across the country to visit a friend. For the first time in a long time, she spent a lot of time alone with her thoughts. She realized that she believed the gospel—the good news of Jesus Christ—and wanted to take the next step.

Aisha decided to publicly confess her faith in Christ and be baptized!

Thank You for Your Support

Thank you for your support of campus ministry through Resonate! Because of caring donors like you, Aisha had a community of support to study the Bible with as she explored questions about Christianity.

“Campus ministry is bringing people together. They do a good job of sharing God’s Word and providing a family and home,” said Aisha.