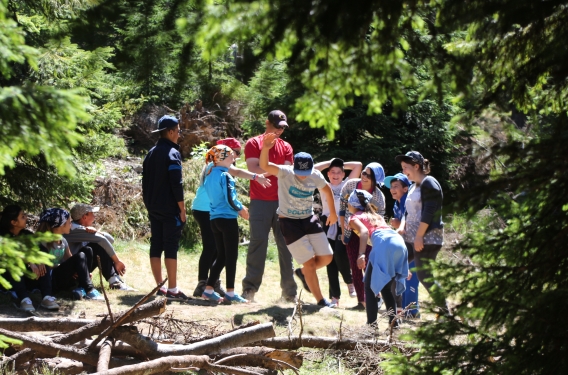 Ana has changed a lot from the shy, quiet girl who joined an IMPACT club in Romania several years ago. She had always seemed really smart, but hardly ever spoke.

Like many young adults, Ana was coming into her own personality and developing her identity. She loved K-Pop (Korean pop music) and Anime (Japanese animated television) in English translation, quickly becoming fluent in English. But Ana also struggled to overcome anxiety and build confidence, especially in social situations.

Ana’s situation is all-too-common in Romania. Under communism, Romanian people were discouraged from taking action in their community or being unique or noticeable in any way, says Kelly Organ, a Resonate missionary who has been serving in Romania for the last five years.

“There was a learned passivity and acceptance of things being broken,” says Kelly.

Fighting against this passivity, Kelly serves with New Horizons Foundation as an international coordinator for youth IMPACT clubs.

Through Kelly and other IMPACT leaders, children like Ana learn to test their faith, make it their own, and work it out by investing in their communities.

“IMPACT creates a beautiful context for people to find hope and for their faith to make sense. It's not rocket science. It's a simple program, based on the principles of positive youth development and loving your neighbor by putting faith into action.”

Kelly recently saw evidence of the changes IMPACT has made in Ana’s life. When a team of English-speaking missionaries came to New Horizons for a Momentum (another Resonate initiative) event, Kelly asked Ana if she would be willing to serve as a translator. Though her habit had been to keep to the background, Ana agreed.

“After a couple of the days she felt more comfortable and just blossomed in her self-confidence,” shares Kelly.

Ana has since become a leader in her IMPACT club, inventing games and activities for the other members.

Like Ana, more and more IMPACT kids are encouraged to use their creativity to reach out to their friends and neighbors. For example, an IMPACT club in a different part of Romania has put on an annual music festival for the past six years to fund a week of adventure camp for kids at a local orphanage.

Imagine a child who has never left their village experiencing the joy of God’s creation for the first time! And God has blessed the gifts of these students. The music festival started small but now attracts local celebrities and “pretty big-name bands,” Kelly shared.

IMPACT has grown from the organization founded by New Horizons into an enormous network of clubs (180 in Romania alone)  making a difference in 25 countries. And in Central America, Resonate has been the main partner in making this growth possible.

Now, Kelly and her husband Jack are moving on to new ministry opportunities in the United States. Thank you for faithfully supporting their ministry. Your gifts to this ministry will continue through new leaders like Ana—leaders who serve and teach their peers around the world. Please continue to pray for God’s blessing on Jack and Kelly’s new ministry opportunities and New Horizons’ service in Romania.