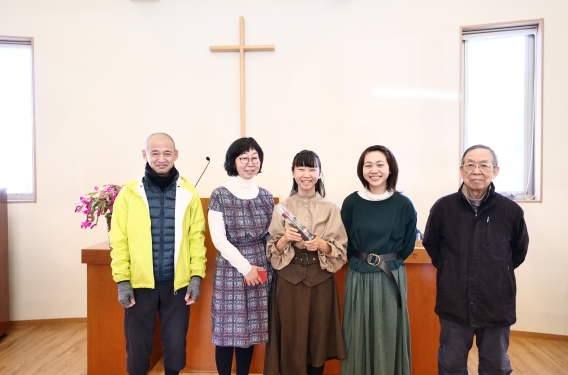 Mina grew up in a Christian family, but she wasn't sure she was "good enough" to follow Christ.

Mina lives in Japan, where many people recognize more than 10 million Gods. A country of around 127 million people, less than one percent of the population is Christian. The likelihood that Mina was born into a Christian family in Japan was slim—but she was.

Her grandfather chose to be baptized after learning about Jesus from a missionary. Over time, his daughter—Mina’s mother—became a Christian too. Her faith was important to her. Mina’s family prayed together, read Scripture together, and attended worship and other church events.

“God was the norm,” said Mina. “But I didn't feel very close to becoming a Christian and following God … I wasn't confident of living as a Christian and was hesitant to be baptized.”

Exploring faith remained a huge part of Mina’s life. She attended worship and other church activities, like youth retreats. But she was still unsure. While she felt pressure from her family to be baptized, she knew she needed it to be her decision.

That’s what Resonate missionaries Jeong and MiSook Gho found so compelling about Mina.

“She’s intentional,” said Jeong. “She wants to know what she believes and why—really have the decision be her decision.”

Jeong and MiSook met Mina six years ago while Mina’s mother was attending a Discover Your Bible training close to the family’s house. Jeong also preached at the family’s church once a month.

Over the years, the Ghos watched Mina grow physically taller. They also watched her grow more curious about the gospel. Mina asked Jeong and MiSook tons of questions about God, the Bible, and Christianity. They asked her questions too.

“I tried to answer as much as possible, but I really wanted her to think through questions for herself too,” said Jeong.

As Mina learned more about God’s love, mercy, and grace, she came to not only understand that she didn’t need to live perfectly in order to follow Christ—she began to believe it. She accepted God’s grace and was recently baptized!

“Christians are not perfect, and that is why God comes and walks together,” she said.

Thank you for sending and supporting missionaries like Jeong and MiSook Gho to countries throughout the world! Because of you, the Ghos were there for Mina when she had questions about faith. They were able to disciple her as she grew in relationship with Christ. Please pray for Mina as she continues to grow as a believer